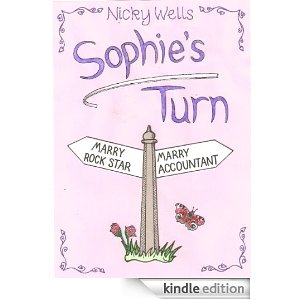 I have just finished Sophie’s Turn by Nicky Wells on my kindle. I love the look of the cover of this book and I think it is the ideal cover for this book.


Plot
Slapper, Slut, Adulteress. This is hardly the words that Sophie Penhalligan would normally use to describe herself. Yet this is exactly how she is behaving, all things considered, even if she isn’t quite married to Tim yet. Aged nineteen, she travelled halfway across the country to honour an invitation by her favourite rock band, Tusk, to join them for the last gig of their tour. And now her past is coming to tempt her... how could Tim ever stand a chance against Dan, the charming, handsome lead singer?
Sophie now twenty-eight and a budding newspaper journalist, is happily embroiled in a relationship with Tim, her boyfriend of two years. Until recently, she was confident that Tim would eventually propose- probably as soon as he could get his act together. But just as Tim’s persistent inaction is beginning to a cast a cloud over their relationship, Dan’s sudden reappearance turn’s Sophie’s world upside down. Thus unfolds a roller-coaster of events including an ill-fated trip to Paris with Tim, a night of unfulfilled romance with Dan, Sophie and Tim’s engagement party gate-crashed by Dan, and Sophie’s professional secondment to accompany Dan’s band on their rival tour- at Dan’s special request and very much against her will.
And then one fine day in Paris, Sophie suddenly finds herself engaged to Dan while her erstwhile fiancé Tim is ... well, doing whatever it is Tim does back in London. What is she to do now? Who wouldn’t give anything to meet their favourite star, let alone marry him?
Find out how Sophie gets into this impossible situation, and how she turns it around in Sophie’s Turn.

My Opinion
When I first started to read this on my kindle I was a little apprehensive as when we meet Sophie at the beginning of this book we don’t really know anything about her other than she is a cheat. I am not a fan of people who have affairs and I can never take to characters in stories who are having affairs. I am glad we persevered with this novel though as when we read on and get to know more about Sophie’s character I can see why it happened and I actually felt sorry for her as she seemed trapped and confused about what she really wants.


The novel flows at a comfortable pace without having any dull or low points where you usually feel like skimming the pages. I love the way this novel finishes it is not predictable and doesn’t finish like normal chick lit books which I think gives this novel an edge on similar books.


I found the storyline felt very realistic and the characters are developed so well we feel as if we really know each character.


I had to contact the author as I was a little spooked at one point in the book as something that happens to Sophie happened to me which was very strange to read and made the book feel more realistic to me.


I would defiantly recommend this book. I feel as though Nicky has a style of writing which makes it easy to read and also using more realistic scenarios which makes the books easier to relate to and enjoy. I found there were also some lovely humorous touches in this novel which were not predictable.


Thank you to Nicky Wells for sending me Sophie’s Turn to read. Nicky has also agreed to a book giveaway so if this book sounds like your kind of read keep an eye out for further information